Jack Del Rio won’t be coaching in 2019. The former Raiders head coach and longtime defensive coordinator has accepted a new job as an analyst for ESPN, per a press release from the network. 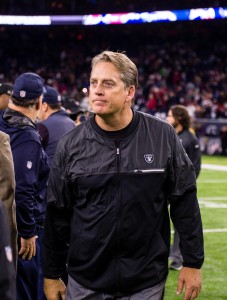 Del Rio was ousted by the Raiders late in 2017 to make room for Jon Gruden. Since then, he’s been in the mix for a few high profile DC gigs. Soon after he was canned by Oakland, the Giants were said to be giving him real consideration. Then, this past February, he nearly became the Bengals’ new DC before things went bust. Even though he’s still a viable coaching candidate, Del Rio will be taking at least a year off before considering new opportunities.

“This excites me about being able to learn about myself and the media business,” Del Rio said during a phone interview. “I’m not going to be afraid of having an opinion and something to offer.”

Del Rio, 55, was either a head coach or defensive coordinator every season from 2002-17. While his Broncos defenses (two top-five units) were better than his Raiders crews — 22nd, 20th and 20th in points allowed, respectively — Del Rio did guide the Silver and Black to their first playoff berth in 14 seasons.