“Guarded Optimism” Andrew Luck Will Be Available For Week 1

The Colts have “guarded optimism” that Andrew Luck will be ready for Week 1 of the regular season, according to Chris Mortensen of ESPN.com (Twitter link). 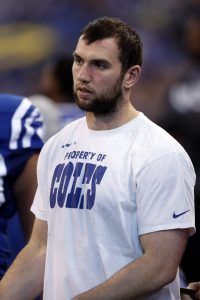 On Wednesday, Mike Garafolo of NFL.com reported Luck’s Week 1 availability was “really in question,” and noted that unless the star quarterback makes a “miraculous recovery,” backup Jacoby Brissett could be under center. However, Garafolo also indicated Indianapolis felt as though it “finally” had a handle on the exact nature of Luck’s injury, which could have led to today’s “optimistic” report.

Luck originally underwent an MRI on his calf in March that revealed a strain, but began to experience ankle trouble in May. Another test Monday revealed Luck could be dealing with some sort of high-ankle issue, though it’s not evident if he’s been diagnosed with a dreaded high-ankle sprain. At the moment, it doesn’t appear Luck is experiencing any Achilles trouble.

Luck won’t play during the preseason, and his absence will give Brissett even more time to prepare for the regular season. Brissett, of course, was the Colts’ full-time starter in 2017 when Luck st out the year with a shoulder injury. In 15 starts, Brissett completed 58.8% of his passes for 3,098 yards, 13 touchdowns, and seven interceptions. Among the 29 quarterbacks with at least 300 attempts that season, Brissett finished 22nd in adjusted net yards per attempt.