It doesn’t seem like there’s an end in sight to the Jadeveon Clowney saga. The Texans have been looking to trade the former first overall pick, but he holds some leverage in trade negotiations because he needs to sign his franchise tender before he can be moved. Clowney was originally slated to report to the Texans after Week 3 of the preseason, but we heard earlier today Clowney changed his mind once he found out Houston was looking to deal him. 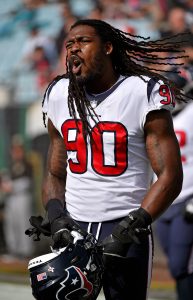 Clowney has been telling people he’s willing to drag his holdout into the regular season, according to Mike Garafolo of NFL Network, who has spoken to multiple sources around the star outside linebacker (Twitter link). In a follow-up tweet, Garafolo’s NFL Network colleague Ian Rapoport writes that he’s heard the same.

As Garafolo points out, he has no financial incentive to sit out games. The deadline has passed for franchise-tagged players to get extensions from their current teams, so he won’t be getting any more money from the Texans in 2019. In fact, he’ll be forfeiting about $1MM for each game he misses since he’s slated to earn $15.967MM under the tag in 2019.

Garafolo reports that Clowney is genuinely hurt by the Texans’ desire to trade him, and that they allowed him to meet with the Dolphins. Houston is clearly planning for life without Clowney, giving his backup Brennan Scarlett an extension earlier today. We’ll keep you updated as we hear more, but as of right now it looks like there’s a very good chance he isn’t on anyone’s active roster come Week 1.