The full breakdown of Tom Brady‘s latest Patriots contract is not yet available, but one piece of language in the deal points to the sides needing to readdress this issue in several months. 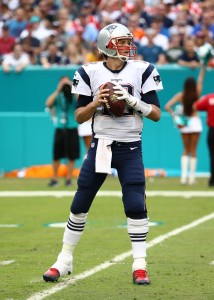 The two additional years on Brady’s deal are void years, according to Field Yates of ESPN.com (on Twitter). This is a tactic teams use to create additional cap space, and it ended up proving the Pats more than $5MM in additional 2019 funds. It essentially means Brady’s new contract amounts to a 2019 pay raise — an $8MM bump. After that, one of the longest unions in NFL history becomes less clear.

Brady and the Patriots have expressed flexibility to talk contract again next year, and Michael Giardi of NFL.com tweets the future Hall of Fame passer is “perfectly content” playing on a year-to-year basis. But the sides will need to do so to ensure the New England icon plays another season with the Patriots. Brady has repeatedly said he would like to play into his mid-40s, and Robert Kraft said during Super Bowl LIII week he would be “quite surprised” if Brady wasn’t the Patriots’ starting quarterback for “quite a while.”

The Saints used the void tactic in Drew Brees‘ most recent contract adjustment and incurred more 2020 dead money in doing so. Both the Patriots and Saints are annually committed to Super Bowl runs, so it is not surprising to see the franchises make moves to better their situations this year. Whether the Patriots make another move to further bolster their 2019 team remains to be seen.

They have been connected to Trent Williams, with Jeff Howe of The Athletic noting (subscription required) the team has explored a deal for the Washington left tackle. The Pats’ 2018 first-round pick and projected left tackle starter, Isaiah Wynn has not yet participated in a full camp practice. Wynn tore an Achilles’ tendon during training camp last year. And the subject of a Rob Gronkowski unretirement has continually surfaced in recent weeks. That would be another obvious place where the Pats’ new money could go.