No Criminal Charges For Ezekiel Elliott

We learned back in July that Cowboys running back Ezekiel Elliott would not be suspended for an altercation between him and a security guard in Las Vegas in May. However, that security guard did elect to file charges against Elliott, so the running back was not completely out of the woods. 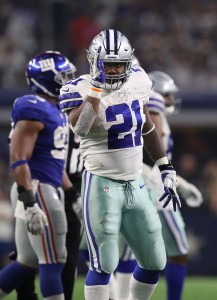 Until now. A source tells Clarence E. Hill Jr. of the Fort Worth Star-Telegram that Elliott will not be charged in connection with the alleged assault. Hill reports that members of the Las Vegas Metropolitan Police Department met with prosecutors at the end of July, and prosecutors determined they could not move forward with the case.

Hill adds that Elliott, who has been working out in Cabo San Lucas, Mexico, as he continues to hold out for a new contract, has returned to Dallas for a “brief respite.” However, there has been no progress on a new deal between Zeke and the Cowboys, and the star RB is expected to return to Cabo shortly.

In the meantime, rookie fourth-rounder Tony Pollard continues to impress in preseason action, which may or may not give Dallas a little more leverage in their negotiations with Elliott.

4 comments on “No Criminal Charges For Ezekiel Elliott”