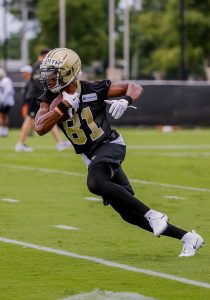 Meredith failed to meet his high expectations in New Orleans thanks to health issues, but he’s apparently healed up from the torn ACL and assorted problems suffered towards the end of his run in Chicago.

With the Saints, Meredith had just nine receptions on the year. But, in 2016, Meredith flashed major potential with 66 grabs for 888 yards and four scores in 14 games, only ten of which were starts.

The Patriots could use someone like Meredith as Julian Edelman deals with a thumb injury and Demaryius Thomas works his way back from the PUP list. Of course, Josh Gordon also remains suspended, leaving a need for talent in the WR group.