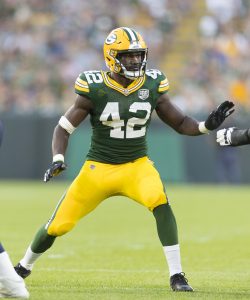 The second-year linebacker sustained the injury, originally believed to be a shoulder injury, in the first quarter of Green Bay’s preseason opener vs. the Texans. When asked on Thursday, Packers coach Matt LaFleur did not provide an update on whether the injury would cost the linebacker significant time.

“Honestly, I don’t really know anything right now,” LaFleur said. “It’s kind of wait and see, but I hope not.”

A third-round selection in 2018, Burks appeared in 14 games as a rookie, starting four. He logged 24 tackles and was expected to take over as a starting inside linebacker alongside Blake Martinez in 2019. Though Burks was slated as a starter, it is essentially a part-time role in defensive coordinator Mike Pettine’s scheme, which calls for a hybrid safety at times to fill the role.