The Chargers’ depth took yet another blow during their win over the Dolphins on Sunday. After the game, head coach Anthony Lynn announced that tight end Sean Culkin had torn his Achilles. 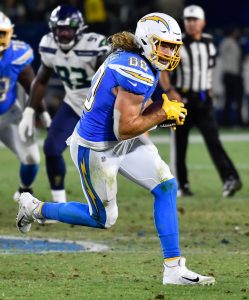 Obviously, he’ll miss the rest of the season. Due to injuries Culkin had been thrust into a pretty big role, playing 58 percent of the team’s offensive snaps last week against Houston. He had one catch for 12 yards against the Dolphins before going down. Culkin originally entered the league as an undrafted free agent out of Missouri back in 2017. With Culkin out for the year, the Chargers’ tight ends room is now extremely thin.

Starter Hunter Henry is still at least a couple of weeks away with his knee injury, and normal backup Virgil Green missed the Miami game with a groin injury. Los Angeles recently signed veteran Lance Kendricks, and he’s now the only healthy tight end on the roster. Naturally, people will start buzzing about Antonio Gates, but the Chargers have resisted any talk of a reunion up to this point.