It’s the best news Avonte Maddox and the Eagles could have hoped for. Doctors have diagnosed the cornerback with a neck sprain, according to NFL.com’s Ian Rapoport (on Twitter). 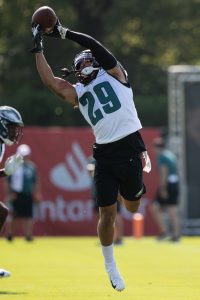 Maddox is now considered week-to-week and likely to miss a few games. Given the scary scene that unfolded on Thursday night, it’s a huge relief. Maddox was carted off of the field after colliding with teammate Andrew Sendejo, and, initially, this appeared to be something much worse.

In addition to the neck sprain, Maddox was believed to have suffered a concussion. Given the serious nature of both injuries, the Eagles are expected to play it safe with the 23-year-old and not rush him back out on to the field.

So far in 2019, Maddox has tallied 16 tackles across four games (three starts). Last year, he notched 35 stops, plus four passes defensed, one tackle for a loss, and one forced fumble.

The Eagles’ CB group has been thinned out by injuries to Maddox and Ronald Darby, who figures to miss roughly a month with a hamstring ailment. One has to imagine that the Eagles are seriously interested in acquiring Jaguars star Jalen Ramsey to fill the void, though the asking price has climbed to new heights.