Some Trent Williams buzz surfaced Tuesday, and he represents a potential solution for a team with a notable need at tackle. The Browns have been engaging with the Redskins in Williams talks for a while now, but Jeremy Fowler of ESPN.com tweets the Redskins are still standing firm. 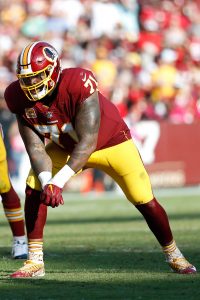 A rumor circulated Tuesday about Williams being Cleveland-bound soon, but the Washington Post’s Les Carpenter notes (via Twitter) the Redskins insist that is not true. Washington has used a different primary left tackle for the first time in 10 years, doing so as Williams’ holdout surpassed the six-game mark.

The Browns viewed the Redskins’ asking price as too high, per Fowler, who adds Cleveland has been inquiring about the nine-year veteran blocker for “a while.” It is not known if the Redskins have dropped their asking price.

Redskins president Bruce Allen said last week the team has not engaged with any of the league’s other 31 franchises about Williams, though reports over the summer insisted Washington had discussed Williams with multiple teams. The 31-year-old tackle is a seven-time Pro Bowler who is signed through 2020. This should naturally generate interest, despite Williams’ recent injury history. Williams rumors should gain steam as the Oct. 29 trade deadline nears.

The Browns continue to start left tackle Greg Robinson, whom they cut just before the season and re-signed days later. Baker Mayfield has endured a notable sophomore slump and would stand to benefit from a tackle upgrade. Washington has been starting veteran Donald Penn in Williams’ place.