The Redskins will consider interim head coach Bill Callahan for the so-called “permanent” post (Twitter link via NFL.com’s Ian Rapoport). That makes two known internal candidates – offensive coordinator Kevin O’Connell is also getting real consideration for the job. Rapoport expects the Redskins to evaluate Callahan and O’Connell before opening things up to external candidates in December. 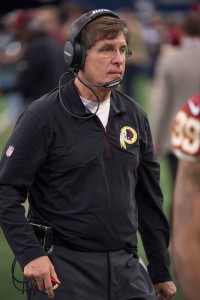 If Callahan wants the gig, he’ll have to find a way to turn things around in Washington. Heading into tonight’s game against the Vikings, the Redskins are 1-6 with their only win coming against the lowly Dolphins a couple of weeks back.

O’Connell hasn’t gotten tremendous results, either, but he is highly respected around the league and in the Redskins’ front office. The Redskins, for all their woes, have a history of developing young offensive coaches that have skyrocketed through the ranks. After Sean McVay, Matt LaFleur, and Kyle Shanahan found success elsewhere, the Redskins may be inclined to keep O’Connell in their yard.

In other Redskins news – running back Adrian Peterson and cornerback Josh Norman are active for tonight’s game against the Vikings. The Redskins may also see Trent Williams again sometime soon, though there’s no guarantee that he’ll play even if he does report.