Colts To Stick With Adam Vinatieri?

The Colts are looking at kickers, but that doesn’t necessarily mean they’re going to make a change. The plan is to stick with Adam Vinatieri, coach Frank Reich says (Twitter link via Stephen Holder of The Athletic). 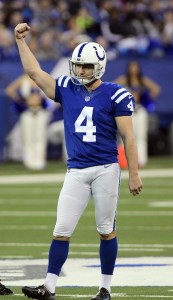 “Adam is our kicker. Chris and I have talked about the situation. Obviously there have been other kickers in here,” Reich said. “When you take a look, we believe Adam is the answer.”

Vinatieri, 46, has missed six extra points and five field goals this season. His woes have cost them games, including Sunday’s loss to the Dolphins.

Still, Vinatieri is a future Hall of Famer with a resume full of Super Bowl rings and clutch kicks. The Colts, clearly, are keeping some options in the back pocket but Vinatieri’s job is safe – for now.

Vinatieri will look to get back on the right track on Sunday when the Colts take on the Jaguars on Sunday afternoon. Then, it’s a short week for the Colts as they face the Texans in Houston on Thursday night.

6 comments on “Colts To Stick With Adam Vinatieri?”