Ohio State star Chase Young is facing an indefinite suspension, as first reported by Austin Ward of Lettermen Row. The Heisman Trophy candidate’s collegiate career could be over, which means that he can turn his attention to preparing for the 2020 NFL Draft, where he’s expected to be a Top 3 selection. 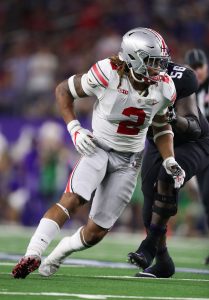 The school did not disclose details, but Young gave some clarity on his situation in a statement on Friday morning:

“Unfortunately, I won’t be playing this week because of an NCAA eligibility issue. I made a mistake last year by accepting a loan from a family friend I’ve know since the summer before my freshman year at OSU. I repaid it in full last summer and I’m working with the University and NCAA to get back on the field as soon as possible. I want to thank my family, teammates, coaches, and the whole Ohio State community for all the love and support. God bless and go Bucks!”

However, the “family friend” that Young referenced in his statement is actually an NFLPA-certified agent, as Mike Florio of Pro Football Talk reports. That obviously casts this story into an entirely different light, though as Florio notes, this development could ultimately be more problematic for the agent than for Young.

Young, listed at 6’5″ and 265 pounds, has been on an absolute tear this season with 13.5 sacks and 29 total tackles through eight games. He’s met – or exceeded – every expectation after a breakout 2018 sophomore campaign with 10.5 sacks and major plays against some of the school’s biggest rivals.

If the season ended today, the Bengals would have the first crack at Young, followed by the Redskins, Jets, Dolphins, and Falcons. It’s unclear whether Young’s draft stock will fall because of his decision to accept a loan from an agent, though that seems unlikely.