With Aaron Rodgers in the running for his third MVP award, he will have another weapon to target. Third-round rookie tight end Jace Sternberger will come off the Packers’ IR list, Ian Rapoport of NFL.com tweets. 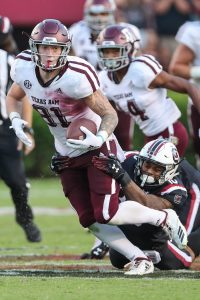 The Packers placed Sternberger on IR in early September but will use one of their two return slots on the Texas A&M alum. Sternberger was one of this draft’s top tight end prospects, having completed a breakout season for the 2018 Aggies.

Green Bay spent most of its top offseason resources to help out its defense, signing Za’Darius Smith, Preston Smith and Adrian Amos before using both of its 2019 first-round picks on defenders (Rashan Gary and Darnell Savage). Sternberger went off the board at No. 75 overall, doing so after a 48-reception, 832-yard, 10-touchdown junior season. The 6-foot-4 tight end had only caught one pass in his previous two seasons in College Station.