The Cowboys have not met with Urban Meyer to discuss their head coaching position. At least, that’s what owner Jerry Jones said in an interview on 105.3 The Fan in Dallas (Twitter link via ESPN.com’s Todd Archer). 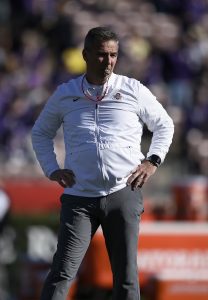 Any talk of a recent meeting between Stephen Jones and the former Ohio State coach is “absolutely not correct,” said JJ, who added, “the facts are we just have not talked to any coach or potential coach in the NFL.”

Meyer is one of the most accomplished head coaches in college football history and boasts a 187-32 career record that includes a whopping 12-3 mark in Bowl Games. He also won three national championships, two with Florida and one with Ohio State.

His success with the Buckeyes led to some NFL interest, and he said in December 2015 that he had recently spurned an NFL team’s advances. He always seemed content with his collegiate job, but he announced last December that he would retire from coaching after the Buckeye’s Rose Bowl game on January 1, 2019 (which Ohio State won).

Meyer left the sidelines due to health concerns, which would seemingly rule out coaching in the NFL, but many believe that he would have interest in the Dallas job.

Meanwhile, speculation continues to swirl around the job security of current head coach Jason Garrett. Last week, Jones seemed to indicate that Garrett might not return to the team in 2020, though he feels that he will be “coaching in the NFL next year.”

22 comments on “Cowboys Owner: We Didn’t Meet With Urban Meyer”