If Jason Garrett wants to keep his job, he’ll have to lead the Cowboys to the NFC Championship Game. NFL.com’s Ian Rapoport tweets that Dallas will have to make the conference championship to prevent his firing. 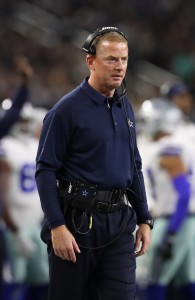 There were rumblings earlier this year that Garrett could be on the hot seat, but the organization made it clear that they wouldn’t make a coaching change this season. The Cowboys currently sit at an underwhelming 7-7, but that’s good enough for them to sit tied for first (with Philly) for the top spot in the NFC East. Garrett took over the head coach position midway through the 2010 season, and he’s led Dallas to an 84-66 record. The Cowboys only have three playoff appearances during the coach’s stint.

We heard earlier this month that the Cowboys would have interest in Oklahoma head coach Lincoln Riley if they elect to move on from Garrett. Owner Jerry Jones and his family already have a relationship with Riley stemming from Riley’s recruitment of Jones’ grandson, John Stephen Jones, who ultimately elected to play his collegiate ball at Arkansas.