Da’Shawn Hand‘s season is over. On Thursday, the Lions placed the defensive lineman on injured reserve, ruling him out for the Lions’ final three games. 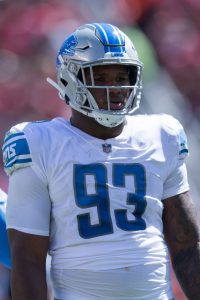 Between his ankle injury and an earlier elbow issue, Hand has appeared in just three games this season. The 2018 fourth-round pick’s year will end with just six tackles, a disappointing follow-up to his three-sack rookie campaign.

To take his place on the roster, the Lions promoted wide receiver Travis Fulgham from the practice squad. Fulgham will give the Lions an extra set of hands at wide receiver, following Marvin Jones‘ IR placement this week.

With a 3-9-1 record, the Lions are currently in line for the No. 5 overall pick. The race to the bottom is tight, so a win over the Buccaneers this week could significantly drop their standing in the draft order.