2019 has obviously been a very disappointing season for the Lions, but they aren’t going to be shaking things up too much this offseason. Both head coach Matt Patricia and GM Bob Quinn will return next season, owner Martha Ford told reporters on Tuesday. Patricia is in his second year as head coach after previously serving as New England’s defensive coordinator. Quinn has been the GM since 2016, and also came over from the Patriots. 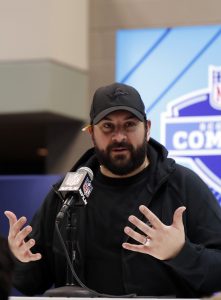 Ford also told reporters that the expectation is the Lions will compete for a playoff spot next year, essentially saying outright that a repeat performance won’t be tolerated. Ford also shot down rumors that the family was considering selling the team. All that being said, that doesn’t mean everybody is going to make it through. “Other staff changes are possible” still, tweets Tom Pelissero of NFL Network. The defense has been a glaring weakness, and it certainly wouldn’t be surprising if defensive Paul Pasqualoni found himself out of a job at the end of the season.

In recent weeks there had been a lot of speculation about Patricia’s job status and talk that he could get fired, but he never seemed too worried and now we know why. It seems likely that Patricia and Quinn’s futures will now be tied together, and if one of them is given the boot after next season then they both will be. Detroit got off to a hot start this season with a 2-0-1 record, but things fell apart rapidly.

They came within a play of beating the Chiefs and moving to 3-0-1 the following week, but came up short. A one-point loss to the Packers followed, and then things spiraled out of control. All told, they’ve now lost ten of their last 11 games. They’ve suffered a rash of injuries, most notably to quarterback Matthew Stafford. Stafford has missed the past six games, and they’ve now gone from Jeff Driskel to undrafted rookie David Blough under center.

Clearly ownership believes the injuries were to blame for the disaster of a season, and they’ll get at least one more chance to run it back. Fortunately for Quinn and Patricia, they’ll have a high draft pick at their disposal. There was a local media report that Amazon founder Jeff Bezos had interest in buying the Lions, but the franchise shot that down emphatically, per Michael Rothstein of ESPN.com.

“We’ve been approached about interest in buying the team, but there’s been no serious discussions,” team president Rod Wood said. “And the Ford family plans to own the team and there’s [succession] plans in place.” We heard last month that Bezos was interested in buying a team, but it apparently won’t be the Lions.