The Dolphins have added Mack Hollins to the mix, but they weren’t the only team to make a claim on him. The Lions also tried to snag the wide receiver, Field Yates of ESPN.com tweets. 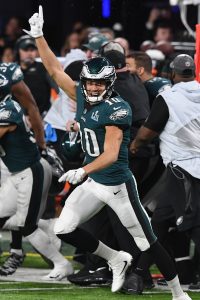 The Lions, of course, lost out on Hollins, due to having a stronger record. The Dolphins have the fourth-highest waiver priority in the NFL thanks to their 3-9 record. The 3-8-1 Lions, meanwhile, are sixth.

The Lions viewed Hollins as developmental depth, which is roughly why the Dolphins went for him. With an $804K cap figure for this season and a small bump to $894K for 2020, Hollins is a cheap pickup that could pay dividends for Miami going forward.

The Eagles gave Hollins extensive work this year while other receivers were sidelined with injuries. Hollins played in at least 50% of Philadelphia’s offensive snaps in six games this season, but produced just 10 receptions for 125 yards.