The first candidate to replace Ron Rivera as Panthers head coach has surfaced. The Panthers interviewed ex-Packers HC Mike McCarthy after their game against the Colts on Sunday, Adam Schefter of ESPN.com reports (on Twitter). 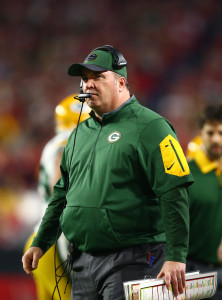 This marks a step back toward the sideline for the 13-season Packers leader, who interviewed for the Jets’ and Browns’ coaching positions during the 2019 hiring period. McCarthy was mentioned as a possibility for the Panthers’ vacancy, with new owner David Tepper‘s top priority believed to be a coach who is a strong manager of people. Tepper fired Rivera early to hit the ground running on the search for his replacement; the Panthers are unable to meet with active NFL assistants until after the season.

After firing Rivera, Tepper made comments that made it sound like the Panthers would be focusing on an offensive-minded head coach. That is the expectation. While McCarthy does not fit the analytically geared coach the second-year owner seeks, the Panthers have gone all-defense in their 25-season history, moving from Dom Capers to George Seifert to John Fox to Rivera.

McCarthy has taken the 2019 season off, doing so after enduring a similar fate to Rivera in 2018. The Packers fired McCarthy on Dec. 2, 2018. He went 204-125 as Green Bay’s head coach, piloting the Packers to nine playoff berths in that span. While McCarthy did have Hall of Famer Brett Favre and future Hall of Famer Aaron Rodgers calling the signals for nearly the entirety of his tenure, he is a Super Bowl-winning coach who is on the market. This might not be the 56-year-old Pittsburgh native’s only interview of this cycle.

A detailed report surfaced in April indicating McCarthy and Rodgers butted heads about the Packers’ offense, which was often the subject of criticism during the latter years of McCarthy’s Green Bay stay. But McCarthy was there during Rodgers’ developmental tenure and certainly helped the all-time great grow into the player he became.

The Panthers have a high-profile quarterback of their own in Cam Newton, albeit one who is not certain to be on their 2020 roster. Prior to his Packers years, McCarthy served as OC in New Orleans (during most of Aaron Brooks‘ run) and San Francisco.