The Redskins are interested in Stanford head coach David Shaw for their own HC job, and Washington is expected to pursue Shaw this offseason, as Jason La Canfora of CBS Sports writes. Of course, Shaw has rebuffed advances from NFL clubs in the past, and if he is going to jump to the professional ranks, it seems unlikely that the Redskins would be his top choice. 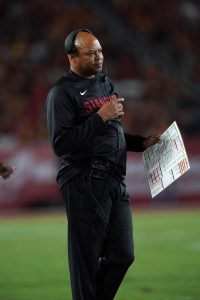 Still, owner Dan Snyder is expected to aim high, and he has had success in bringing high-profile candidates to the Redskins’ sidelines in the past. As La Canfora notes, head coaching candidates are wary of Washington head of football operations Bruce Allen‘s role within the organization, so if Snyder relieves Allen of his duties — which sounds like a real possibility — perhaps the Redskins could attract a coach with an impressive resume.

La Canfora reported back in October that Snyder would try to trade for Steelers head coach Mike Tomlin, and he says that remains Snyder’s preference. But given that Tomlin is in the midst of perhaps his finest work with Pittsburgh, that seems like even more of a pipe dream than it did when that rumor first surfaced.

16 comments on “Redskins Interested In David Shaw As HC”