Ryan Tannehill had done a lot to rehabilitate his value this season, and we learned earlier this week that his performance could lead to a long-term contract offer from the Titans. Well, it sounds like the veteran is receptive to sticking around Tennessee, as agent Pat Dye Jr. said the organization will have every chance to re-sign his client. 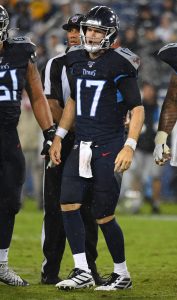 “They will have every opportunity to work it out if they determine he’s their long-term answer,” Dye Jr. told ESPN’s Jeremy Fowler (Twitter link).

As Fowler details in another tweet, the Titans were interested in signing Tannehill to a two-year deal following their trade with the Dolphins. However, the quarterback opted for a one-year, $7MM deal (with up to $12MM in incentives) instead. This decision provided the veteran with some flexibility in case Marcus Mariota retained the starting gig. That didn’t end up being the case, as the Titans seem set to move on from the former second-overall pick.

Tannehill took over as the Titans starting quarterback in Week 7, and he’s led his team to a 6-1 record since that time. In total, the 31-year-old has appeared in nine games (seven starts) this season, completing 73.4-percent of his passes for 1,993 yards, 15 touchdowns, and five interceptions. The veteran leads the NFL in both passer rating (118.5) and yards per pass attempt (9.8).

Despite rumors that Tennessee could put the franchise tag on Tannehill, we recently heard that the Titans were considering a deal that would make Tannehill their starting QB for the foreseeable future. That is quite a development for a player who rarely lived up to his billing as a first-round pick with the Dolphins. Given his history, contract negotiations could be complicated, but at this point, it would not be surprising to see Tannhill land something akin to the four-year, $88MM pact (with over $50MM guaranteed) that Nick Foles received from the Jaguars this year.

21 comments on “Ryan Tannehill Open To Long-Term Deal With Titans?”