It doesn’t sound like the Browns will hire Urban Meyer to be their next head coach. 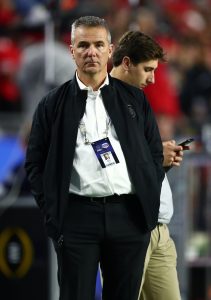 Haslam’s statement could be interpreted one of two ways. Taken at face value, this means the Browns do not have Meyer atop their list of head coaching candidates. It’s also quite possible that Meyer, who figures to have a number of suitors in this cycle, has already rejected overtures from the team.

Either way, the Browns’ head coaching search will – for now – be limited to NFL circles. That head coach will be hired before the GM, Haslam says, with the head coach collaborating on the GM hire. Then, the HC and GM will have roughly equal footing in the organization, with both men reporting directly to Haslam.