New Cowboys coach Mike McCarthy is a fan of offensive coordinator Kellen Moore, Ian Rapoport of NFL.com hears (on Twitter). McCarthy hasn’t made any firm decisions on his staff, but it seems like McCarthy is more than open to keeping Moore in his current role. 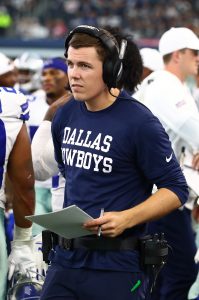 Moore, 31 this summer, took over for Scott Linehan prior to the 2019 season. The Cowboys’ offense lacked consistency throughout the year, but McCarthy isn’t necessarily placing the blame at Moore’s feet.

Marvin Lewis – the other only known candidate for the Cowboys head coaching vacancy – was reportedly eyeing Hue Jackson as his OC. The hiring of McCarthy means that Moore will have a chance to stay in Dallas, despite the departure of Jason Garrett.

Speaking of McCarthy – Rapoport hears that he has landed a five-year pact with the Cowboys. The financial terms of the deal are not yet known.