Giants legend Eli Manning is retiring from football, but he won’t formally be placed on the league’s list of retired players, as PFT’s Mike Florio explains. It’s a small, but important distinction that could be factor should the quarterback consider coming out of retirement in 2020. 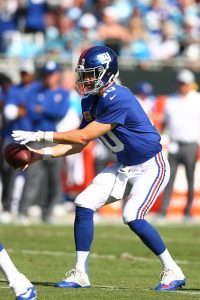 Manning retired, in large part, because he would not have had an opportunity to start for the Giants or any other club in 2020. But, hypothetically, a midseason injury to Daniel Jones or another QB1 could open the door for someone like Manning.

If Manning was on the list and the Giants wanted him back, they’d be subject to the same potential barriers as Rob Gronkowski. In 2019, Gronk would have had to return by Week 13 if he wanted to suit up for the Giants, because he was officially designated as a retired player. Meanwhile, Marshawn Lynch was not on the list, which paved the way for his late-season Seahawks reunion. If Manning wants to come back, he’ll have no obstacles in his way, just like Beast Mode.