Following the best statistical season of his career, Falcons tight end Austin Hooper is set to hit free agency. However, the Pro Bowler told 92.9 The Game in Atlanta that the front office hasn’t approached him about a new contract (Twitter link). 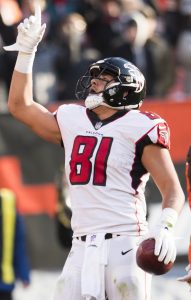 “I mean my whole attitude is that it will happen the way its supposed to,” Hooper said. “I did my part, ended up here at the Pro Bowl, so if the organization wants me, they’ll offer me [a contract].

“I still haven’t received an offer from them. If and when they’re ready…I’ll let my representation and the representation of the Falcons handle it. But as of now, I’m just enjoying what could be my last game as a Falcon down here at the Pro Bowl.”

“The reality of right now is we are trudging along,” Dimitroff said (via the team’s website). “After the Super Bowl week, we’ll continue to see how we’re moving forward. At this point, there’s no updates on Austin.”

We heard earlier this week that the organization wouldn’t be slapping Hooper with the franchise tag, which is projected to be north of $10MM. After handing out a number of lucrative extensions last offseason, the Falcons are projected to have only $6.7MM in cap space this year. If they want to retain Hooper, they’ll have to keep creative with their cap machinations.

Despite appearing in a career-low 13 games, Hooper finished with career-highs in receptions (75), receiving yards (787), and touchdowns (six).