USC offensive lineman Austin Jackson is heading to the NFL. The junior announced that he’ll forgo his final season at USC and declare for the NFL Draft (via Ryan Kartje of the Los Angeles Times). 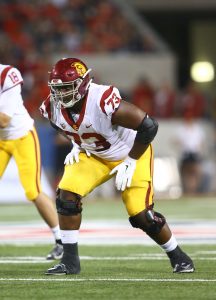 “USC has truly been such a special place to call home for the last three years,” wrote Jackson. “Thank you to the boys on this team. I couldn’t imagine a better group to have played with. It’s been an honor to be a part of this incredible Trojan brotherhood and to go to war with you guys every day.

“With that shared, I will be foregoing my senior year to pursue my lifelong dream of playing in the NFL.”

Despite undergoing offseason surgery, Jackson earned All-Pac-12 first team honors during his final season at USC. This performance helped boost his draft stock, as the left tackle is expected to be selected at some point during the first two rounds. Kartje notes that some scouts consider Jackson a bit of a project, but his size and athleticism will make him a commodity.

Kartje writes that USC is still awaiting word on the status of junior wideout Tyler Vaughns, who’s been debating staying or declaring. Vaughns finished this past season with 74 receptions for 912 yards and six touchdowns.

2 comments on “USC’s Austin Jackson To Declare For Draft”