The Falcons would like to re-sign tight end Austin Hooper, the best player at his position eligible for free agency, but their tight salary cap situation means they will have to let him test the open market. You can expect plenty of interest in Hooper’s services, and as Jason Lieser of the Chicago Sun-Times writes, the Bears are planning to pursue the two-time Pro Bowler. Meanwhile, Vaughn McClure of ESPN.com hears that the Redskins will also go after Hooper (Twitter link). 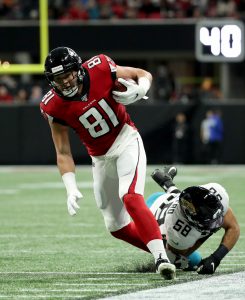 The interest from Chicago and Washington makes plenty of sense. Not only has the tight end position become hugely important in many NFL offenses over the past several seasons, but neither club got much production from their own TEs in 2019. The Bears’ Trey Burton saw his second year in Chicago almost completely wiped out by mismanaged recovery from sports hernia surgery and a calf injury, and as Lieser notes, Burton underwent surgery again this offseason. While the team is hopeful he can return to form in 2020, it’s far from a certainty. And even if he does, having a weapon like Hooper would be a huge lift to an offense that relies heavily on tight ends and that features an uncertain QB situation.

The Redskins also make plenty of sense as a landing spot for Hooper. The club pursued Greg Olsen before he signed with the Seahawks, and Washington needs to add to its cadre of weapons for Dwayne Haskins, or whoever happens to be under center in 2020. Last year, the Redskins’ tight end group was paced by Jeremy Sprinkle, who caught 26 passes for 241 yards and a TD.

In Atlanta, Hooper, 25, was busy setting career-highs in receptions (75), yards (787), and touchdowns (six), despite playing in only 13 games. He is clearly a player on the rise, and he will be a hot commodity over the coming weeks.

Lieser believes the Bears are a long-shot to sign him, and it’s unclear if Hooper would want to join a rebuilding outfit like the Redskins, as he will likely have more appealing destinations available to him.