Greg Olsen Expected To Sign With NFL Team This Week

Greg Olsen is almost ready to make his free agent decision. By the end of the week, the tight end expects to choose his next NFL squad, Ian Rapoport of NFL.com (on Twitter) hears. 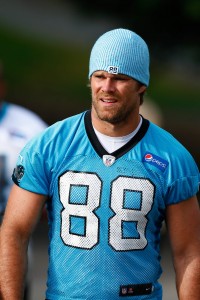 Olsen kicked off his free agent tour by meeting with the Bills last week. Today, he’ll huddle up with the Redskins before moving on to the Seahawks on Wednesday.

It has been said that Olsen is also weighing a jump to broadcasting, but from the sound of it, the tight end will be staving off retirement for another offseason. Olsen has garnered lucrative offers from both ESPN and FOX over the years, so it stands to reason that those opportunities will be there waiting for him, whenever he’s ready to hang ’em up.

The Seahawks would probably represent Olsen’s best chance to win a Super Bowl ring, but the Bills and Redskins also have a lot to offer. With the Bills, Olsen would have an opportunity to pair with the young and promising Josh Allen and occupy a significant role in the offense. The Redskins, meanwhile, would allow him to reunite with Ron Rivera, the longtime Panthers coach that guided him to a streak of three 1,000-yard seasons and multiple Pro Bowl appearances.

Olsen, 35 in March, has notched 718 catches for 8,444 yards and 59 touchdowns over the course of his career. Last year, he had an uncharacteristically quiet season with the Panthers – 52 grabs, 597 yards, and just two touchdowns in 14 games.