The Lions have spoken with multiple teams about trades involving cornerback Darius Slay, sources tell ESPN.com’s Adam Schefter (on Twitter). Other clubs believe that the Lions will ultimately wind up moving the Pro Bowler, Schefter hears, but the Lions are insistent on getting fair value in return. 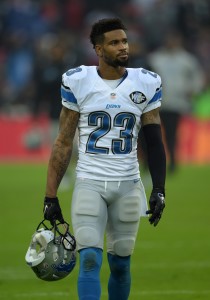 The Lions might not have much in the way of leverage. Slay is entering the final year of his contract and it appears that extension talks have stalled. Any team that acquires the Pro Bowler would have to cough up a significant amount of draft capital and give Slay a new deal that would reflect his place as one of the league’s top cornerbacks.

As it stands, Slay has one more year to go on his deal at $10MM. That’s well-below the going rate for a CB of his caliber – Slay is in position to ask for somewhere around $15MM over the course of a long-term pact.

Slay has expressed a desire to stay put, though he also wants to be appropriately compensated. Over the last year, the Lions have mulled the possibility of moving on from him, including a pre-deadline conversation with the Broncos about a blockbuster that would have sent Chris Harris Jr. to Detroit.

Before the deadline, the Eagles also made a serious push for Slay. Those talks did not result in a deal either, as the Lions held out for a whopper of a haul. It’s not clear exactly what the Lions were asking for, but it was enough to make the ever-aggressive Howie Roseman walk away, even after he lost out on Jalen Ramsey.