Redskins Visit Up Next For Greg Olsen

Greg Olsen finished up his Bills visit on Thursday morning, as Adam Schefter of ESPN.com tweets. Olsen, who isn’t in any particular rush to sign, left without a deal. His next visit will be with the Redskins, followed by the Seahawks. 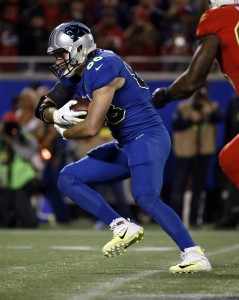 The order of Olsen’s three visits may or may not be an indicator of his preference. The Bills would make some sense for Olsen – they’re not high on anyone’s list of Super Bowl contenders for 2020, but they do have a talented young quarterback in Josh Allen and Olsen could provide him with a better security blanket than rising NFL sophomore Dawson Knox.

Ditto for the Redskins – expectations aren’t high in D.C., but they would give Olsen an opportunity to reunite with old friend Ron Rivera. Of course, the two were together for years in Carolina, where Olsen went on a tear of three straight 1,000-yard seasons. No one knows what’s in store for Jordan Reed after a scary number of concussions; Olsen can help them fortify that position and possibly take over as the TE1, if needed.

The Seahawks, meanwhile, are in a better position to win right away. And, with serious uncertainty around their tight end situation, Olsen would be a logical fit. Will Dissly might not be 100% after his Achilles tear and Ed Dickson could be a cap casualty in the coming weeks. Beyond those two, Luke Willson is scheduled for free agency in March and Jacob Hollister will be a restricted free agent.

There will probably be more teams beyond those three with interest in Olsen. Earlier this week, Olsen said that he’d like to hear from the Bears – his first NFL team – but hasn’t been in touch with them since his release from the Panthers.

4 comments on “Redskins Visit Up Next For Greg Olsen”