Three years ago today, an Atlanta Falcons legend decided to hang up his cleats. We learned on February 15th, 2017 that wideout Roddy White was calling it quits. 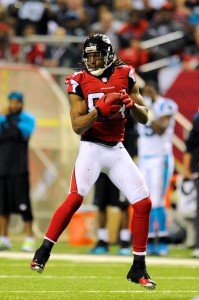 Similar to most professional athletes, it didn’t sound like White necessarily went out on his own terms. After having one of the least-productive seasons of his career in 2015 (43 receptions, 506 yards, one touchdown), the receiver struggled to find his next gig. After getting cut by Atlanta, there were rumblings that he’d catch on with the Patriots, but the team ended up opting for Nate Washington (kind of ironically, the Falcons and Pats would meet up in that season’s Super Bowl).

He was approached by the Vikings midway through the 2016 campaign, but the team was out of the playoff picture by the time White was in game shape. The Titans and Buccaneers also expressed interest, but the veteran was content on only signing with a contender. White ultimately sat out for the entire 2016 season, leading to his retirement decision.

White retired having compiled 808 receptions for 10,863 yards and 63 touchdowns. The 2005 first-rounder spent his entire career with the Falcons, making four Pro Bowls and earning a First-Team All-Pro nod in 2010. He also owns a number of franchise records, both for a career (receiving touchdowns, receptions) and for a single game (including most receptions in a playoff game (11)). White was was inducted into the Falcons Ring of Honor this past December.

2 comments on “This Date In Transactions History: Roddy White Retires”