The Chiefs are making a move to keep their deep receiving corps intact. They are bringing back Demarcus Robinson on a one-year deal, Tom Pelissero of NFL.com tweets. 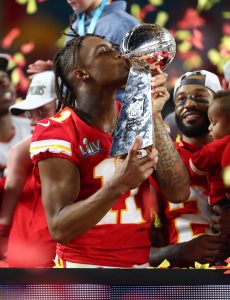 A four-year veteran, Robinson hit the market as a UFA. But the majority of the wideouts who entered free agency did not find significant demand for their services, with the upcoming draft class playing into this team-friendly marketplace.

Robinson’s deal is worth a fully guaranteed $2.297MM but, due to the new CBA’s veteran salary benefit, will count only $1MM against the Chiefs’ cap, Pelissero adds (via Twitter). Teams can sign two vested veterans via this method each year.

After a report linked the Eagles to being in the mix for the longtime Chiefs auxiliary wideout, not much known interest came Robinson’s way during free agency. He now will return to Kansas City, rejoining a Chiefs receiving corps that still includes Tyreek Hill, Mecole Hardman and Sammy Watkins. The latter has been a long-rumored cap casualty but remains on the team.

Robinson, 25, turned in his best season during the Chiefs’ first Super Bowl campaign in 50 years. He established career-high marks in catches (32) and receiving yards (449), hauling in four touchdowns. Since Patrick Mahomes took over as Kansas City’s starter, Robinson has totaled eight TD receptions. In Week 2 of last season, Robinson torched the Raiders for 172 yards and two scores.

The Chiefs entered Saturday with the NFL’s least cap space, so this Robinson pact will almost certainly be a low-cost agreement. It stands to allow the former fourth-round pick to return to one of the friendliest receiver environments in recent memory and potentially elevate his stock for a 2021 free agency run.

The ex-Florida Gator coming back also provides insurance in case the Chiefs do part ways with Watkins, who is the NFL’s 11th-highest-paid wideout but at best the third option on his own team. Watkins is set to make a non-guaranteed $13.75MM base salary next season and count a seemingly untenable $21MM against Kansas City’s cap.