The Chiefs have agreed to a one-year deal with former XFL quarterback Jordan Ta’amu, according to Aaron Wilson of the Houston Chronicle (Twitter link). 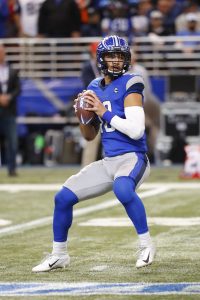 Ta’amu, 22, went undrafted out of Ole Miss in 2019 but spent a month with the Texans after being signed as an undrafted free agent. Soon after, Ta’amu joined the St. Louis Battlehawks of the XFL and proceeded to complete 72% of his passes for 1,050 yards, five touchdowns, and two interceptions. He became available to NFL teams when the XFL suspended its 2020 season due to coronavirus earlier this month.

Clearly, Ta’amu won’t come anywhere near the starting job in Kansas City, and doesn’t have a realistic shot at the No. 2 role after the Chiefs re-signed veteran Chad Henne. But Ta’amu will get the opportunity to join the reigning Super Bowl champions and work with one of the league’s best quarterback gurus in Andy Reid.