Despite Philip Rivers, Jacoby Brissett and Andrew Luck (dead money) accounting for more than $53MM on the Colts’ 2020 payroll, the team plans to keep its recently demoted quarterback. 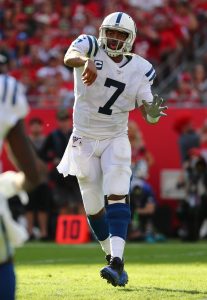 Brissett remains in the Colts’ plans for 2020, according to Jeremy Fowler of ESPN.com (on Twitter). The Colts released Brian Hoyer minutes ago and now have Rivers at a $25MM price. Brissett is due a $7MM guarantee Sunday, but Fowler notes the team plans to retain the fifth-year passer to play behind Rivers.

After Luck’s retirement, the Colts gave Brissett a two-year, $30MM deal. He is set to count $21.4MM against Indianapolis’ cap next season. The Colts saw Brissett improve mightily from his 2017 performance, but after Jim Irsay said all options were on the table this offseason, the team signed Rivers. Brissett will return to the QB2 role he played in 2018. Rivers has never missed a start since taking the Chargers’ reins at the 2006 season’s outset.

The Colts rejected multiple trade offers for Brissett in 2018, and Irsay said that year he would be unlikely to trade the former Patriots draftee for a first-round pick. Chris Ballard and Frank Reich came out in support of Brissett after Luck’s healthy 2018 season, and the Colts have one of the league’s best backup quarterbacks in the fold — albeit at a higher-than-usual rate.

With the Colts still in need of a long-term answer, it is unclear how they will proceed with Brissett beyond 2020. But for now, it looks like he will be a high-priced backup and play a fourth year in Indianapolis.