Brian Hoyer‘s stay with the Colts will stop at one year. After the Colts signed the veteran quarterback to a three-year, $12MM deal late last summer, they are cutting him, Ian Rapoport of NFL.com tweets. The Colts announced the move. 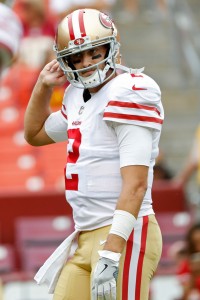 The Colts guaranteed Hoyer $9MM, so they will incur some dead money by moving on after one season. But their quarterback plans have changed significantly since then, with Philip Rivers bound for Indianapolis. The Colts will take a $2MM dead-money hit by cutting Hoyer.

Hoyer has played on seven NFL teams and figures to be a candidate to either rejoin one of his previous six or sign with an eighth franchise soon. The 34-year-old passer generated interest after the Patriots cut him last August, and given the Pats’ rather notable change at quarterback this week, it is worth wondering if they would be interested in another reunion. Tom Brady‘s respect for his former two-stint backup points to the Buccaneers as another possibility, per Field Yates of ESPN.com (on Twitter).

Jacoby Brissett‘s knee injury resulted in Hoyer starting a game last season. For the year, he threw four touchdown passes and four interceptions, completing 54% of his passes. Hoyer has now played for the Patriots, Cardinals, Browns, Texans, Bears, 49ers and Colts. Should the former UDFA suit up for the 2020 season, it will be his 12th.

Together, Rivers and Brissett are set to count more than $46MM toward the Colts’ 2020 cap. When factoring in Andrew Luck‘s dead money, the nearly $53MM figure at this position comprises more than a fourth of the Colts’ 2020 payroll. That wildly high-priced positional commitment will not allow for an expensive backup. The Colts created $3MM in cap space by releasing Hoyer.