The Falcons took care of one of their free agents Saturday, reaching an extension agreement with fullback Keith Smith. The team announced the parties agreed on a three-year contract. 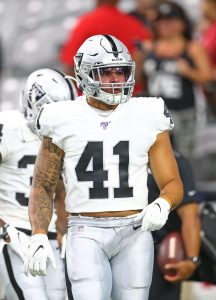 Cut by the Raiders after training camp, Smith latched on with the Falcons just before the 2019 regular season. He played 198 offensive snaps with Atlanta — the sixth-most among fullbacks last season — and is now locked up through the 2022 season.

The soon-to-be 28-year-old blocking back has played six NFL seasons. He spent four seasons with the Cowboys and one with the Raiders. Smith’s 2020 base salary will likely be determined by the players’ decision on the CBA, which is due at 10:59pm CT Saturday. If the agreement is ratified, minimum-salary players will receive an approximate $100K salary spike.

Devonta Freeman is not a lock to return as the team’s backfield centerpiece, but Smith is set to reprise his role as the team’s blocking back. It is not yet certain who will be the beneficiaries of Smith blocks, however.