Panthers cornerback James Bradberry is eligible to hit the open market later this month, and he has 22 teams interested in his services to some degree. The Panthers may be one of those teams, but do not look for Bradberry to return to Carolina in 2020. 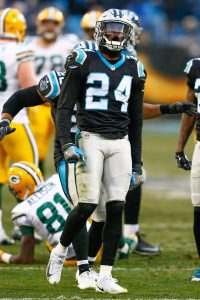 As the 2019 season drew to a close, we heard that the Panthers were prioritizing an extension for Bradberry, and that GM Marty Hurney had asked his talented DB to be patient, thereby implying that an offer would be forthcoming. However, Jourdan Rodrigue of The Athletic says that while there was some conversation between player and team in the fall, those talks did not advance very far (Twitter link).

Rodrigue says that the Panthers would not increase their offer, and the team “went quiet” after that. Further, because Carolina is entering a rebuild, a franchise tag — at a cost of roughly $16.5MM — is not an option.

Bradberry is one of the best corners available in free agency this year, and he is one of those players that looks better on the field than he does in advanced metrics evaluations. Given the level of interest in him, the clear consensus from around the league is that he is much better than the analytics suggest — Pro Football Focus ranked him as a middle-of-the-road defender in 2019 — and since he will only be 27 by the time the 2020 season starts, the small-school (Samford) product may not yet have hit his ceiling.

Bradberry is shooting for a deal that will pay him more than $15MM per season, and with 22 teams taking a look, he may just get what he’s asking for.

3 comments on “James Bradberry Unlikely To Re-Sign With Panthers”