Wide receiver Robby Anderson is a free agent, but a market has yet to develop for his services, per Connor Hughes of The Athletic. None of Hughes’ sources have heard of a team making a legitimate run at Anderson, which is somewhat surprising given that the big-play threat represents the best WR on the open market. 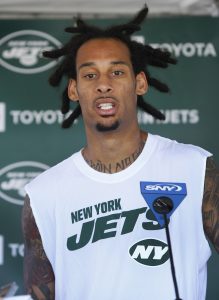 Indeed, Anderson was widely regarded as a nice consolation prize for WR-needy teams that were unable to land a top free agent like Amari Cooper or A.J. Green. Both of those players remained with their current clubs, several other teams filled receiving needs with splashy trades, and Anderson is still looking for a deal.

All of that is good news for the Jets, who legitimately like Anderson and who were always open to re-signing him if his price did not exceed $10MM per season. Now, it’s looking as though he will fit in their budget, and it will be interesting to see if clubs like the Ravens and Texans start to show interest.

Speaking of Jets receivers, Quincy Enunwa‘s $6MM salary for 2020 becomes fully-guaranteed today, as Rich Cimini of ESPN.com observes. There was some speculation that Enunwa could be cut, but since he is still recovering from a serious neck injury, he would have been entitled to $10.1MM in injury guarantees if he were released. He has yet to be cleared for football activities, so his playing career is still in doubt.