On an afternoon featuring action on the wideout market, the top prize is now committed to a team. Robby Anderson will sign with the Panthers, Manish Mehta of the New York Daily News reports (on Twitter). 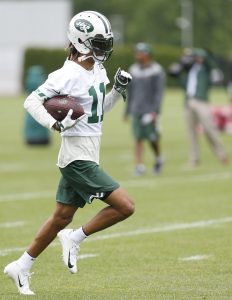 It’s a two-year, $20MM deal for the four-year Jets contributor, Adam Schefter of ESPN.com tweets. Anderson will receive $12MM in 2020. Like P.J. Walker, Anderson is a Temple alum and spent most of his Owls tenure playing for new Panthers HC Matt Rhule.

Anderson adds a weapon to an intriguing Carolina skill-position corps that already includes Christian McCaffrey, D.J. Moore and Curtis Samuel. The Jets had hoped to re-sign Anderson, and the four-year Jet wanted to stay. But the Jets preferred Anderson return for a price, and it appears the Panthers exceeded said price.

Anderson will also reunite with Teddy Bridgewater, his brief teammate during the 2018 offseason. Walker, however, was Anderson’s quarterback while at Temple. The Panthers signed Bridgewater and released Cam Newton on Tuesday. Interestingly, Bridgewater’s skill group looks far better than the one Newton took to Super Bowl 50. The Panthers saved $19MM by cutting Newton, helping them afford Anderson.

A New Jersey native, Anderson became one of the league’s premier deep threats despite going undrafted in 2016. He developed a rapport with Sam Darnold, but the Jets often struggled to assemble an aerial corps around Anderson. Still, the 26-year-old talent topped 750 receiving yards in three straight seasons and eclipsed 900 with Josh McCown running the show in 2017. Anderson averaged between 14.9 and 15.0 yards per reception from 2017-19.

While Anderson has encountered off-field trouble, he now has an eight-figure-AAV contract and will have the chance to re-enter free agency in his 20s.