The Patriots have shown interest in Saints free agent Teddy Bridgewater, according to NFL.com’s Ian Rapoport (on Twitter). The Pats, of course, are in the market for a quarterback after Tom Brady announced that he’ll be heading elsewhere in 2020. 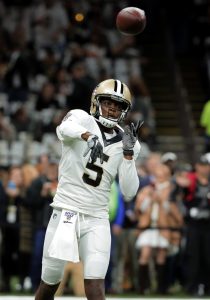 Bridgewater has started in just six games since January of 2016, but he’s also made a complete recovery from his devastating injury. Many believe that Bridgewater can thrive if given the opportunity to start. By extension, there are also many who are questioning the Saints’ decision to move forward with Taysom Hill as the main backup and heir apparent to Drew Brees instead of the proven vet.

Last year, Bridgewater went 5-0 as the Saints’ starter, filling in for Brees while he was sidelined. His performance has made him an appealing option for lots of teams – including the Panthers – so the Pats will have their work cut out for them.

Before the injury, Bridgewater started 28 games for the Vikings from 2014-15, averaging 3,075 yards, 14 touchdowns, and ten interceptions per season. Among the 30 QBs who attempted at least 500 passes in those two seasons, Bridgewater ranked 22nd in passer rating, 25th in adjusted net yards per attempt, and 29th in touchdown percentage.