The Raiders and Packers “are going to be all over” Cory Littleton this week, Vic Tafur of The Athletic (on Twitter) hears. The legal tampering window opens today and both teams will find even more company if they make an aggressive play for the Rams linebacker. 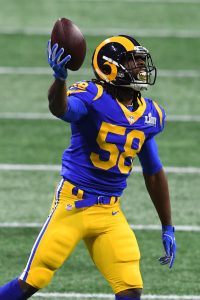 Littleton, 27 in November, is coming off of a solid season in which he registered 3.5 sacks and 134 total stops. In 2018, he turned in a similarly strong year en route to his first ever Pro Bowl selection.

It’s not clear whether the Packers’ recent addition of Christian Kirksey will impact their pursuit of Littleton. On Monday morning, the Packers agreed to sign the former Browns standout to a two-year, $16MM deal.

The Raiders, meanwhile, are armed with lots of cap room and they should have the ability to outbid the Rams, Packers, or any other club if they want him badly enough. The former UDFA is a proven playmaker and would be a significant upgrade for the Raiders’ D – especially since he offers quality coverage ability for a linebacker.