With the draft approaching, 49ers general manager John Lynch conducted a teleconference with the local media Monday where he revealed several interesting nuggets. When asked about a report from earlier today that he was shopping veterans Kwon Alexander, Dee Ford, Jaquiski Tartt, and Marquise Goodwin, Lynch denied the first three but acknowledged the fourth. 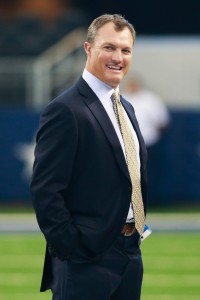 “Marquise is the one guy out of that group that you mentioned where there’s active discussions going on,” Lynch said, via Matt Maiocco of NBC Sports. “The other guys, we love and are really looking forward to playing with moving forward.” It hasn’t been any secret they’ve been looking to trade Goodwin, and we heard last month they’d likely have to end up cutting him. However Lynch claimed there has been legit interest, saying a Goodwin deal “came close a couple of times” this offseason. Goodwin had a career year with San Francisco in 2017 with 962 yards, but injuries sapped his effectiveness and in 2019 he had only 186.

Also late last month we heard longtime left tackle Joe Staley wasn’t necessarily committed to playing in 2020, although Lynch assuaged some of those fears. “We’ve heard nothing that would lead us to believe that Joe is not going to play. So we’re encouraged with that. We’ll see where that goes,” he said. While that still is far from ironclad, it looks like Staley returning for a 14th season is a good bet.

The 49ers hold the 13th and 31st picks in the draft, and there has been speculation they’ll look to trade down since they currently don’t have any selections in the second, third, or fourth-rounds. Lynch confirmed he has talked to teams about potentially trading both picks, per a Maiocco tweet.

However, he said he’d stand pat at 13 if the team could land a “difference maker.” Lynch said that he and head coach Kyle Shanahan have so far identified six players they’d draft with the 13th pick before opting to trade down, Matt Barrows of The Athletic tweets.