The 49ers are shopping several notable names in advance of the draft, according to Mike Lombardi of The Ringer (on Twitter). Execs around the league tell the former GM that edge rusher Dee Ford, linebacker Kwon Alexander and safety Jaquiski Tartt have all been made available for the right price. Wide receiver Marquise Goodwin, who was dangled earlier this year, also remains on the block. 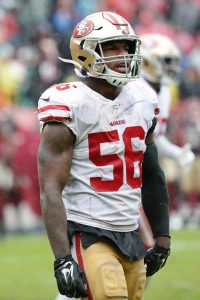 The level of interest in those four players isn’t immediately clear, but the Niners are exploring every avenue in advance of the draft. Ford is set to enter his second season with San Francisco, just one year after coming over via trade with Kansas City. He’s in the midst of a five-year, $85MM contract and coming off of an injury-riddled season.

Thanks to knee, quadriceps, and hamstring issues, Ford was limited to just eleven regular season contests. And, when he was on the field, the 49ers had to ease the 29-year-old into action. All in all, he played on just 22% of the defensive snaps.

Alexander, 26 in August, has three seasons left on his four-year, $54MM deal. The off-ball ‘backer is remarkably tough – he suffered a torn pectoral muscle in November and somehow managed to return for the Niners’ playoff run. Alexander also battled a biceps injury that required surgery in February. These maladies emerged after he missed much of the 2018 season with an ACL tear. They will also drop his potential trade value.

The 49ers used rookie Dre Greenlaw for much of the season in Alexander’s place but reinstalled the highly paid outside linebacker in the starting lineup in the playoffs. Greenlaw has three years left on his rookie deal.

San Francisco had initially constructed Alexander’s contract to make it easier for the franchise to move on from him after 2019. But after a November restructure, that becomes more difficult. The 49ers added void years to Alexander’s contract to create cap space. Because of this, Alexander does not become a realistic cut candidate until 2022. But it appears the 49ers are trying to offload the former Buccaneer’s contract on another team and move forward with a younger player at the position.