A four-year Raiders backup will change sides within the AFC West. The Chiefs have agreed to terms with DeAndre Washington, according to Yahoo.com’s Terez Paylor (on Twitter). It’s a one-year deal. 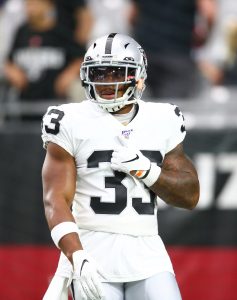 Washington served as the backup to Latavius Murray, Marshawn Lynch, Doug Martin and Josh Jacobs during his career and, due to the lack of tread on his tires as a pro, serves as an interesting addition for the Chiefs.

The former fifth-round pick has amassed just 370 NFL touches; he topped out at 108 carries last season. He will join a Chiefs team that has Damien Williams, Darrel Williams and Darwin Thompson under contract. This will also reunite Washington with his former college quarterback, with the ex-Red Raider having entered the NFL one year earlier than Patrick Mahomes.

The 5-foot-8 back recently turned 27 and has not posted a yards-per-carry average north of 4.0 since his rookie season, when both he and Jalen Richard surpassed 5.0 per tote. Last season, however, he gained 162 yards in starting the Raiders’ final two games. In his final season with Mahomes, Washington rushed for 1,492 yards (6.4 per carry) and totaled 16 touchdowns.

Jon Gruden and Mike Mayock opted to extend Richard, pointing to a Washington exit. Richard doubles as one of the few Reggie McKenzie-era players making the trip to Las Vegas. The Raiders, of course, are likely to have Jacobs as their backfield centerpiece for years.