Arizona State wide receiver Brandon Aiyuk underwent core muscle surgery this morning, as Mike Garafolo of NFL.com tweets. The potential first-round pick has been dealing with the issue for some time and decided to have the operation since offseason activities are likely to be postponed. 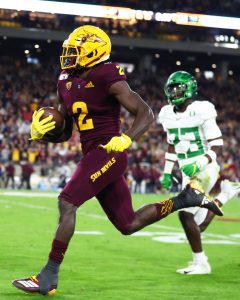 In most drafts, Aiyuk would be a shoe-in first-round pick. This year, due to the wealth of talent at the position, he’s considered to be a borderline candidate for the top 32. Regardless of where he goes, Aiyuk appears to have serious pro potential – his ability to line up outside or in the slot is also a big plus for teams.

The Nevada native transferred from Sierra College to Arizona State in 2018 and put himself on the national radar with a huge 2019. Last year, he led the Sun Devils with 65 catches for 1,192 yards, good for an average of 18.3 yards per reception, plus eight touchdowns. He also impressed in the return game by averaging 16.1 yards per punt return and 31.9 yards per kickoff return.