If the Cowboys go forward with a virtual offseason program next week, Dak Prescott won’t log on, unless he has a new deal in place (via Mike Florio of Pro Football Talk). The online OTAs would be voluntary, just like regular OTAs, so the choice is entirely up to him. 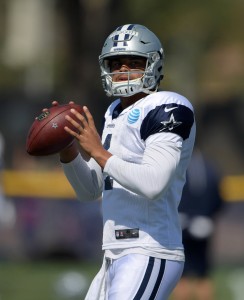 [RELATED: Redskins Wanted To Take Cooper From The Cowboys]

The Cowboys cuffed Prescott with the franchise tag earlier this offseason and he has yet to sign his tender. With a one-year, $31MM+ deal on the table, Prescott is pushing for a multi-year pact that would bring him closer to Russell Wilson‘s league-leading $35MM average annual value. While teammates Amari Cooper and Ezekiel Elliott signed long-term contracts (five years and six years, respectively), Prescott is reportedly looking for a shorter agreement that would allow him to cash in all over again in his prime years.

Even though Prescott’s performance dovetailed in the second half of last season, it’s still possible that he could become the NFL’s new cash leader. The two sides have until July 15 to sort all of that out. If they’re not able to come to terms, Prescott will probably take his time before putting pen to paper, but ultimately play on the one-year tender. Then, after the 2020 season, the two sides will be free to resume negotiations.

Prescott, of course, is not the league’s best quarterback, but he’s one of the better QBs in the game and these deals ultimately come down to age and timing. He won’t turn 27 until the end of July and he’s in a great position to get what he wants from the Cowboys.

The two-time Pro Bowler threw for 4,902 yards and 30 touchdowns in 2019. Many of those throws went to Amari Cooper, who tallied 79 receptions for 1,189 yards and eight touchdowns en route to a massive payday.