A pair of Jets defenders could find themselves on new teams by the end of the weekend. Manish Mehta of the New York Daily News reports (via Twitter) that Avery Williamson is available for trade. The reporter also notes that defensive end Henry Anderson is “[a]nother name to monitor.” 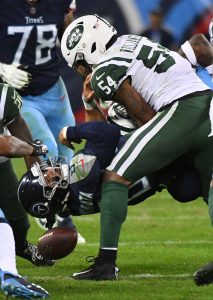 After spending four seasons with the Titans, Williamson joined the Jets back in 2018. He had a productive first season in New York, compiling a career-high 120 tackles to go along with three sacks and two forced fumbles. Unfortunately, he missed the entire 2019 campaign thanks to a torn ACL.

Williamson is in the final year of a three-year, $22.5MM deal (including $16MM guaranteed). It was only a year ago that he rated as a top-20 linebacker per Pro Football Focus, so it wouldn’t be shocking if the Jets find a taker for the 28-year-old.

Anderson joined the Jets via trade back in 2018. The lineman had a career-high seven sacks during his first season in New York, and he finished the 2019 campaign have made a career-high 13 starts.