Lions Split On Decision At No. 3 Overall?

A few options will be in play for the Lions at No. 3 overall. Despite their video chats with Tua Tagovailoa and Justin Herbert, one of them does not appear to include using their top pick on a quarterback. But a few other avenues are open. 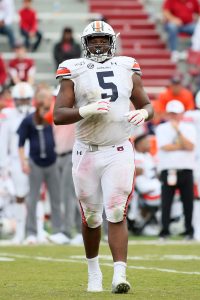 Earlier this month, Okudah appeared to be Detroit’s preference in the expected event that Washington drafts Chase Young at No. 2. The Lions traded Darius Slay and added Desmond Trufant at corner. However, Detroit ranked 29th in DVOA pass defense with Slay in the fold. Okudah would make sense here — if the Lions do not trade down. That course of action looks to be the way the Lions hope to go, La Canfora adds.

Detroit has engaged in trade-down discussions, and those conversations produced some interest. The Lions, though, are not interested in moving down too far. They would like to add draft capital but still come away with a blue-chip defensive talent, JLC adds. The Lions already have nine picks in this draft, however. Only seven teams possess more.

If the Lions do trade down, they would like to have a deal in place by Thursday afternoon, Bob Quinn said (via the Detroit Free Press’ Dave Birkett, on Twitter). They do not want to make the decision to move down while on the clock in this virtual draft. Quinn confirmed he’s discussed trading down and noted the talks will pick up next week.

The Lions recently added ex-Patriots Jamie Collins and Danny Shelton at the respective positions Simmons and Brown play. The franchise has chosen an offensive player with five of its past six first-round picks, with linebacker Jarrad Davis (2017) being the only break in that trend. They have not taken a defensive tackle in Round 1 since selecting Ndamukong Suh and Nick Fairley in 2010 and ’11, respectively.

23 comments on “Lions Split On Decision At No. 3 Overall?”