Sheldon Rankins Expected To Be Ready By Training Camp

Assuming that there is a training camp this year, Sheldon Rankins should be ready for it. The Saints’ defensive tackle is recovering from an operation that prevented a potential Achilles rupture, and while he would not be ready to play if the season started today, Nick Underhill of NewOrleans.Football (subscription required) writes that Rankins is expected to be at full strength by July. 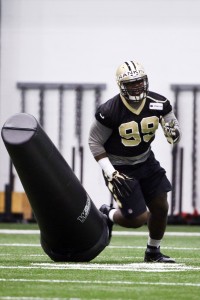 It’s been a tough road for the 2016 first-rounder. His rookie season was delayed by a broken fibula, and while he played a full regular season in 2017 and 2018, he suffered a torn Achilles in the divisional round of the 2018 playoffs that kept him off the field for the first three weeks of the 2019 campaign. Then, he landed on IR last December with his present injury, which was apparently close to being a torn Achilles in his other leg.

When on the field, Rankins has generally been quite productive. The Saints picked up his fifth-year option last April, so he is under contract through 2020 and is scheduled to earn roughly $7.7MM this season. If he stays injury-free and performs well, he could be in line for a nice payday next offseason, but that’s a big “if” at the moment.

The Saints’ defensive front is a strong one, and it has the potential to be dominant with a healthy Rankins in the mix. In 2018, Pro Football Focus’ advanced metrics considered him one of the best interior D-linemen in the game, and he racked up 40 tackles and eight sacks that season. He appeared to be returning to that same form last year before being shelved again.